Barcelona – one of the most famous cities in Spain, was the first stop on my 17 city European tour and it is simply stunning!

Upon arrival my best friend and I made our way from the airport to St. Christopher’s hostel along Carrer de Bergara and just around the corner from the famous street of La Rambla. It was a perfect location for majority of the activities we wanted to do! Our first day we joined a guided bike tour of the entire city to get familiar with the location of everything. Barcelona is a very large city so I would highly suggest renting a bike- it’s the best way to see everything you want. It’s very cheap and much easier to get around than by car or taxi.

This city is so warm and lively, everywhere you turn there is something extraordinary to see or do. Architecture in this region is unlike any other. Antoni Gaudí is representative of Spanish Catalan Modernism and he has works all over the city including Park Güell, Casa Milà , Casa Batlló, Casa Calvet, and of course the famous La Sagrada Familia. You can see all of these on an inexpensive guided bike tour, however I would recommend entering Park Güell and La Sagrada Familia both of which are inexpensive- about €8 and €25 respectively.We bought a 2 day metro pass to visit La Sagrada Familia and Camp Nou stadium since they were too far via bike from our hostel. La Sagrada Familia is an incredible sight. You go knowing it’s quite large but once you’re in it you are just in awe. It’s one sight that renders you speechless.

Another easy bike ride should be taken to Parc de la Ciutadella and the Arc de Triomf which are right next to each other and very easy to get to. Especially if the weather is nice, it’s a relaxing time to walk around the arc and the park area.

Oh and the food, can’t leave that part out! Here, lunch runs from about 2-5pm and dinner 9-12pm, pretty late! Of course you don’t have to eat at these times. Those times are based on the locals and also when restaurants are most crowded.

Spanish cuisine is very famous for what they call tapas. Tapas are snacks or small plates of food, like an appetizer of sorts. This savory Spanish cuisine can be served hot or cold. My personal favorites were patatas bravas and tortilla. Another famous Spanish dish is paella. Paella is a traditional rice dish that is a must eat! It typically has seafood and sausage with rice but you can order it with whichever meat you prefer. It is delicious.

The night life is very vibrant as well. Salsa dance the night away till 5 am if you wish! We went to the Mojito Club where they had a cover with a drink included and a regular MC who would get on the dance floor and salsa line dance with the crowd. Other popular clubs are El Bombon, Antilla Salsa disco, and Club Opium on Barceloneta beach.

We took a day tour out to Sant Feliu de Guixols (about an hour and a half north of Barcelona along the coast) to kayak, snorkel, and cliff jump. It was very cheap- about €60 (not including tips). They provided lunch and safe transportation to and from the city. We were accompanied by a group of Australians tourists and had a Greek tour guide to lead us around the area. The weather was pristine and the water chilly! Since we arrived the first week of June the weather was hot but the water temperature hadn’t quite caught up. The Balearic sea is a cool clear blue that you simply cannot stop staring into.
Our last day in Barcelona, we rode our bikes to Barceloneta beach and relaxed all day. This beach is very fun and full of tourists! It was an incredible way to finish off our trip here.

One of the last restaurants we ate at on La Rambla had a quote on their menu: “We are the city that sleeps all afternoon and stays up till sunrise” and it was completely true! They truly know how to eat and celebrate here.

This lively and colorful city is one you should not miss!

Just an American who moved to Madrid, Spain and didn't look back. Searching for sunshine and tapas along the way :) 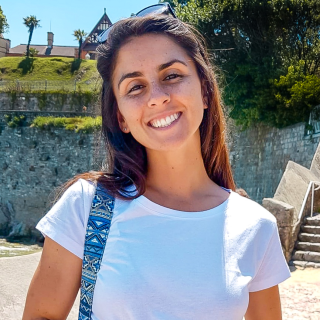 Just an American who moved to Madrid, Spain and didn't look back. Searching for sunshine and tapas along the way :)

There was an error retrieving images from Instagram. An attempt will be remade in a few minutes.

There was an error retrieving images from Instagram. An attempt will be remade in a few minutes.